After retirement in 2013 from the State Department as a Senior Foreign Service Officer, Ken has taught at U. Maine’s graduate school of Policy and International Affairs in the autumn. He continues to work intermittently as senior inspector in the State Department’s Office of the Inspector General, where he was the coordinator for political/economic inspectors before retirement. He has served as Deputy Chief of Mission at the U.S. Embassy in Warsaw, Poland (2005-2008) and at the U.S. Embassy in Prague, Czech Republic (2002-2005). In 2008-09, he led a 40-person, inter-agency Provincial Reconstruction Team in the south-central Iraqi province of Babil.

In 2010-11, Ken served as a faculty member of the National War College in Washington, D.C. He served in 2000-2001 as the State Department’s Deputy Special Negotiator for Eurasian Conflicts with an OSCE mandate to mediate the conflict between Armenia and Azerbaijan over Nagorno-Karabakh. His work on conflict resolution also focused on Abkhazia (Georgia) and Transnistria (Moldova). He is the recipient of several Superior Honor and Meritorious Honor Awards during assignments in Washington, Moscow, Rome, Pretoria, and Warsaw. He speaks Italian and Spanish, Russian, and fair Polish and Portuguese.

A graduate of the University of Maine (BA, 1976), Ken received an MA in 1977 in International Relations from the University of Pennsylvania and an MS in 2000 in National Security Studies from the National War College. He was one of the original members of the the Board of Advisors of U. Maine’s Graduate School of Policy and International Affairs (2007-13). His wife Barbara is a lawyer and they have three adult sons and a daughter. 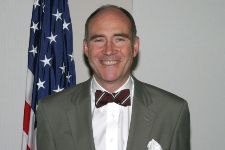